Posted at 20:01h in Highlights in History by ShelleyH
Share

Noblesville and Hollywood – Part I 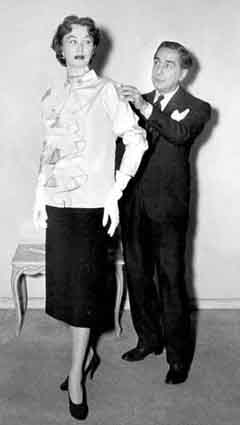 You might think that Noblesville seems to be a long way from Hollywood.  Still, while we don’t have a connection like Fairmount does to James Dean or Fort Wayne to Carole Lombard, fragments of Tinseltown have appeared in this area.  Some of the connections have been very minor, such as Otis Bart, who knew Tom Mix (a famous early western star) when they both worked in a Wild West show.  A man named Blaine McGrath worked for several years as a publicity agent and even sent a short reel of film to Noblesville in 1918 showing himself in Hollywood.  However, there have been a few A-list or B-list celebrities.  This is the first in a series of posts about locals who made onto the big screen.

The most famous Noblesville-Hollywood connection is probably Norman Norell (1900-1972).  His birth name was Norman Levinson and he came from a family that had lived in Noblesville since the mid-19th century.   His grandfather Neuman David, (or N. D. as he was known), and grandmother Merria, or Minnie emigrated from Germany and came to Noblesville in 1857, where they were one of the few Jewish families.  N. D. established a successful clothing store, and the couple raised a family of five children.  They believed in education, charity, and community involvement.  N. D. was highly respected and, while he was never elected to office, his advice was sought on political matters and he had a strong influence.  His wife Minnie spent much of her time giving food and clothing to the poor and caring for the sick.  She was highly respected in other ways – forty years after her death, a local bartender told a writer that he would “knock his block off” if the writer said anything disrespectful of Mrs. Levinson.  The writer was told by another local man that “no better woman ever lived than Minnie Levinson”[i].  She worked extensively with the Ladies Aid Society on several projects, including keeping the library open.

Norman’s father, Harry Levinson, was N.D.’s second son.  He sold the family clothing store in Noblesville in 1906 and moved to Indianapolis to start his own haberdashery.  Norman became interested in fashion design as he grew up and moved to New York in 1918 to study at the design schools there.  That was when he took the name “Norell”.

The film industry provided him with one of his first opportunities to do clothing design.  The Paramount movie company had a studio at Astoria, New York, and in 1922, they made a film called “Zaza” starring Gloria Swanson.  In her autobiography, “Swanson on Swanson” (1980), she claimed that one of the reasons she did the film was because Norman Norell was doing the costumes.  Actually, he was still a relative unknown in the early 1920’s and she was indulging in selective reminiscence.  She did, however, like his designs. After “Zaza”, Norell did the costumes for the Rudolph Valentino film, “The Sainted Devil” (1923).  Unfortunately, no copies of this film exist.

Soon after this, Norell left the film industry to do costumes for stage shows and, in 1924, began to focus on high fashion.  By the 1930’s, his designs were attracting national attention and by the 1950’s, he was one of the top American fashion designers.  He was winning fashion awards and creating dresses for Hollywood stars and president’s wives.  He was on the cover of Life magazine three times.

Then in 1962, he made a return to film work.  The Doris Day – Cary Grant movie “That Touch of Mink” required three special outfits for the female lead to wear.  Gary Grant selected them off the rack at Norell’s showroom.  The trailer and clips can be seen at https://www.tcm.com/tcmdb/title/92724/That-Touch-of-Mink/.

Following this, in 1963, Norell made Lee Remick’s entire wardrobe for the film “The Wheeler Dealers”, a satire on Wall Street that also starred James Garner.  He was famous enough that his name was included on the poster as part of the advertising.  The trailer and clips can be seen at https://www.tcm.com/tcmdb/title/95463/The-Wheeler-Dealers/.

Norell may have done other film work as well, but not as the featured costumer.  He made clothing for several actresses like Dinah Shore, Carol Channing, and Lena Horne.  He was the favorite designer of Lauren Bacall and in 1965, she asked him to design the costumes for her Broadway show, “Cactus Flower”.  She claimed in her autobiography, “By Myself” (1979), that she had convinced him to do stage costumes for the first time, not realizing that he had done stage work back in the 1920’s.  When Norman Norell died in 1972, the Chicago Tribune and other newspapers called him “the dean of American fashion design”.  He was laid to rest in Noblesville in the family mausoleum in Crownland Cemetery.

[i] John Stoner, S. O. Levinson and the Pact of Paris: a study in the techniques of influence (Chicago, Ill.: University of Chicago Press, 1943).